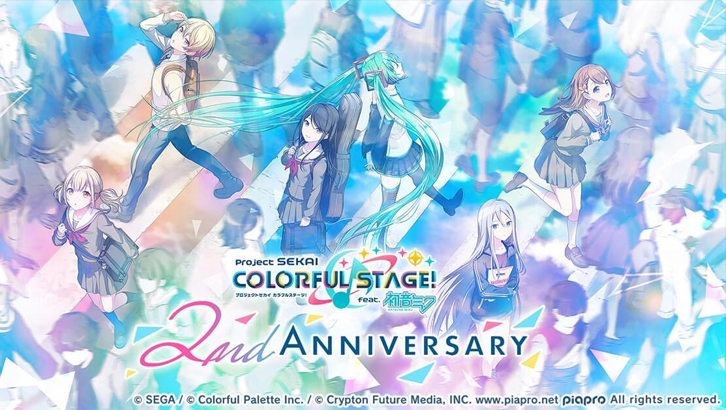 Pros : + One of the best JP rhythm game right now. So, it have a lot of active players in game. + Full of vocaloid songs. + Have 6 vocaloid characters and male characters. + Simple controls. + Simple UI and not stressful for eyes and brain. + Several QoL features, imo the most important is changing the amount of live bonus (stamina) consumption per run or song, it can be set to 2 or 3 for optimal rewards or 5~10 for faster run. + Have different size of notes (especially big notes) as unique mechanic, so higher difficulty charts are challenging for player. + Fun (or pain) notes based by song lyrics. + Beautiful card artstyle which difficult to describe. + Less fanservice, eh wait...

+ Very care for story NPC (like it have an unique art), tho i'm not a story reader. + Original project sekai characters are likeable and have good vocals or covers. + Popular voice actor or seiyuu, mostly come from rhythm, music, or idol series. + Keep releasing a new song, so that's including introducing some new vocaloid song producer and no more hibernation for the popular one. + All of 5 groups have a lot of good song, especially Vivid Bad Squad and 25ji. + Feature to change song vocals. Including another vocal version, so some song have a bit change of lyrics and feeling/atmosphere. + Have some feature which can't be found in other gacha rhythm games. Even, some feature is basically for players who likes to simp or oshi

Cons : - Minimum requirements are high. - The game size is too big, especially if download with some mv. - 3d mv is lag on some device. - Lack of game settings. - Hard to get limited ssr card you wants, except being a lucksack or whale. - More grinding and farming if the game get a comparison with other gacha rhythm games out there (this is optional tho). - Device dependency, than any other mobile rhythm games out there. Because it's somewhat harder to execute flick, slide, big notes, and notes timing/accuracy especially on high difficulty songs (start from diff 28+) without proper device. - Design of most master (highest difficulty) charts are annoying imo, thanks to their bad habit (from overchart, difficulty spike, thin slides, sightread or difficult pattern, etc.). Not good for replayability after getting full combo or all perfect. - Too much releasing master song with difficulty 30+. Also, multifinger charts for diff 33+ added into the game, so kek, rip dev statement about "all songs are made to be full comboable with 2 fingers". - Recent charts are getting harder and harder. - Most charts difficulty rating are not suitable. - Quick summary, Proseka charts are designed more for satisfying pro rhythm players. - Matchmaking in multiplayer mode is sometimes full of bugs. - Playing master difficulty on multiplayer is less scoring and rewarding, especially if the player or device is suck at accuracy and combos. Even, majority of player in this game is picking to play hard or expert difficulty instead. ----- TL;DR Project Sekai is very aesthetically pleasing, fun, and challenging rhythm game. Also, it have a lot of vocaloid baits, make it very worth to play