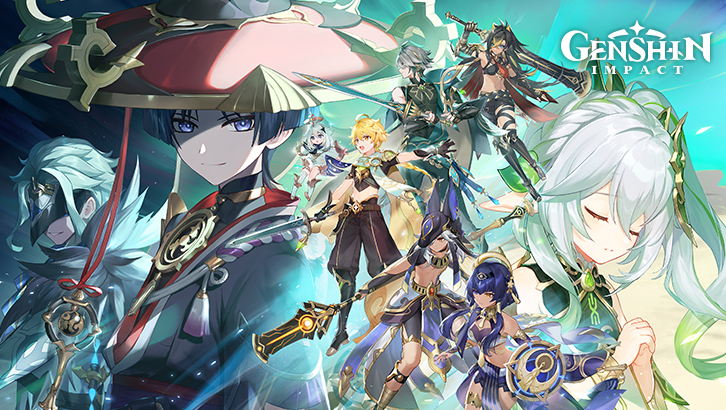 Genshin Impact is a MMORPG released by miHoYo Limited and is now available on Android, iOS, PC, PS4 and PS5 platforms. The data can be linked among different platforms. The game is also planned to be released on Nintendo Switch with online play with a maximum of 4 players. Players can enjoy the game with Japanese, Korean and English voiced dialogues together with Chinese, English, Japanese and a total of 13 languages subtitles.

The story takes place in the fantasy world "Teyvat". Players can choose to play as one of the separated twin brothers and sisters with different personalities. They will need to embark on an adventure, find their loved ones, and discover the truth about the "Genshin".

The game includes more than 30 unique characters such as Hu Tao, Xiao, Kaedehara Kazuha and many more!

There are 7 gods, 7 elements and 7 countries in the Genshin Impact world.

Since this game is a MMORPG, players can explore different routes and enjoy various scenery.

Genshin Impact is an open-world RPG developed by miHoYo Limited.
Introduction
Aeons ago, the elder elemental gods gave civilization to the human race, but the world soon splintered as corruption and greed grew without check. The gods watched from their abode in Celestia and selected the worthy to sit by their side and maintain the balance that hold the world together in one piece.
Magical Universe
The world is divided into culturally unique environs and themes. Delve into the ruins of a blasted empire that went too far in forbidden technologies, scale massive gothic towers of medieval fortresses, savor fine tea from jade pavilions, spar with kenshis in Sakura woods, and let your imaginations go wild in this definitive Universe. The epic backstory and lore will enrich your thirst for more knowledge about this magical universe…
You and your sibling traveled to Teyvat from another world. Separated on arrival, and now stranded here, you set about searching for answers from "The Seven" — the Gods of each element. Along the way, you will freely explore this wondrous world, join forces with a diverse range of characters, and unravel the countless mysteries that Teyvat holds. But when you learn of an ancient threat now facing this world once more — will you, an Outlander, be the one to stay the flames?
Massive Open World

Run, climb, swim and glide your way across a beautiful open world that is all your own, full of jaw-dropping landscapes for you to behold, intriguing challenges to conquer, and diverse cultures to immerse yourself in.

Harness the elements to unleash elemental reactions and dish out epic damage. Forget hack and slash — Genshin Impact brings a new era of combat that requires both brains and brawn.

With a plethora of unique characters who join you along your journey, there is always another story to be told. Just what does this new world have in store for you?

Team up with friends to trigger even more elemental action, and take on challenging domains to reap rich rewards.

Let the beautiful sounds of Teyvat pull you in as you relax into the calming, expansive world around you.

WhiteMess
4.6
2020-10-04 02:09:27
Beware this game is almost 7 GB big, eats your battery like a starving pig & turns your phone into a hot potato. Besides all that miHoYo did not disappoint with the graphics, they're mesmerizing & the soundtrack is excellent as well. It's an open world game, so there's a lot to explore. While everyone is talking about Breath of the Wild here, I'm getting some serious Tales of Zestiria vibes from it with all that elemental stuff & entering the city in the beginning. I found the start of the story interesting but after playing more, it lost my interest. It's nice to learn about the world you just dropped in & find comrades along the way, but it seems kinda basic to me & looks like you're gonna be stuck only in this city. Well, it's still just the beginning so maybe later there'll be more to it. Now this game committed 2 serious crimes. 1st crime: Paimon is too adorable 2nd crime: I can't pat the doggos & kitties

552 79
yuki
4.2
2021-08-31 14:40:22
do not download this game it will install a virus called "genshin impact"
133 35
Sajawal Saeed
5.0
2021-03-25 19:48:34
After playing the game for almost 4 months, this is my progress and review. It's gonna be a long one cause this is how I feel after playing this game for this long. This is a review for clearing out misleading stuff about the game and as for review, you can check my ratings above that I gave to it; Progress: AR48, completely F2P, have 3 5* characters in team (Ganyu, Mona and Qiqi) which I got from hitting soft pity everytime, have all of the 4 stars except Razor, daily playtime: 2 hours average, Original resin in the inventory: 43, Console: Android 4GB Review: Despite getting all the hate the hate for being "predatory" and "not f2p friendly", I wanna clear out some rumors or straight up, lies about this game, First off this game is extremely f2p friendly and not predatory at all cause you can clear the entire game even with just the starter characters that they give you. Gacha is completely optional and you don't even need 5* character at all to finish the game or by that extension any 4* character from gacha as well. There is no resin pay wall unless you are a hardcore gamer who plays for 8 hours daily. You won't even need to use your resin supply that game provide after ascending Adventure Rank if you are a casual gamer (This comparison ofcourse only holds true for F2P players). And to be fair, the resin cap is only there so the people don't skim through all the game content in one go. What MiHoYo failed to foresee was an impatient fanbase who treats the game as a PvP rather than PvE. Secondly, the gacha in this game is one of the most generous gacha I've seen in mobile games and I know this for a fact I have fair share of experiences with gacha games. People will say that the gacha is terrible cause the drop rate is even below 1 percent. Factually what they should be saying is the gacha drops of 5* characters or items are 0.6% but for 4* it's unbelievably 6% which is saying too much cause even some 4* are as good as 5*, if not better. Moreover the game has pity system which means at 90th roll you'll definitely get a 5* but you'll have to be really unlucky for not hit a 5* at soft pity. The rewards for the game might seems really low from a first glance but if you look at it collectively it pretty fair. My average result from estimation will be that over a course of almost 4 months you can get upto 300 rolls if you don't spending any money. This also brings one yet another small point that the F2P players in the community are acting as if it's their right to get all the 5* characters as if they paid for it which is absolutely absurd. If you miss out on a character then be patient. It's a gacha game. They're sure to rerun the banner sometime in the future meanwhile you should save your primogems for that character. Third point, artifacts drops in this game have random stats so it's extremely difficult to farm good artifacts that's why (from my personal experience) they're not worth the effort. The artifacts I use on my characters are mostly four stars with just crit dmg/rate substats mostly which are really low if you take my adventure rank into account (AR48) and hence the reason I don't farm for artifacts and still have 43 original resins unused in inventory. Talents material on other hand can be really tough to farm, but for players like me it's more of a challenge than frustrating. The reason why people call the game difficult for F2P cause they don't know how to build characters properly, end up getting stuck in the progression and jump to the conclusion that it must be a pay wall. No, it's not. To the contrary this game is quite easy if you know what you're doing. My concern for the game is that from what it seems so far is that this game is about 25% finished (personal guess) and it's already occupying 10 GB space on my phone. And I fear that with future content and update this size might stretch upto 50 GB by the time the game is complete which will be too much for android players unless they find a way to compress it somehow without effecting the gameplay. So in conclusion, I'm really excited for what MiHoYo will bring to this game in future.
113 17
View more reviews >